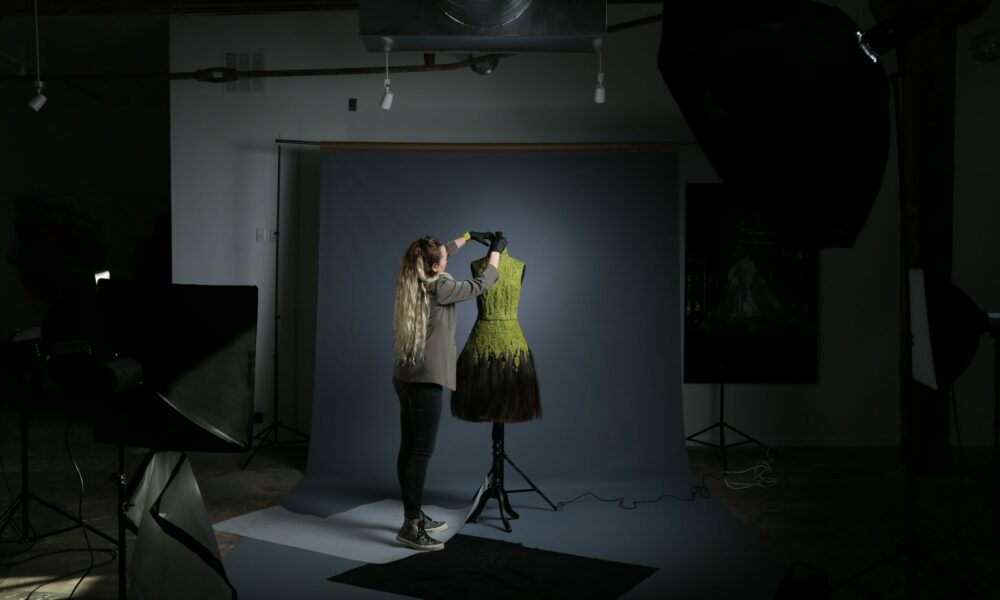 Today we’d like to introduce you to Kasper Lorene Woldtvedt.

Hi Kasper, can you start by introducing yourself? We’d love to learn more about how you got to today?
With a passion for footwear, a newly found obsession with Alexander McQueen, and a love for disco balls and everything that sparkles, I graduated from Webster University with a Bachelor of Fine Art in Graphic Design. Upon entering the real world, I was hired to be the head coach for a small club USA swim team. I excitedly accepted that unique opportunity, but with a new design degree in tow, I also got a part-time job at a local paper store in hopes of growing a creative career while coaching swimming.

During my first year as a head coach, I realized there were two swimmers with the potential to go to the Olympics. Knowing that my attention was focused on building a career in the arts and they deserved someone who had a long-term dedication to their growth, I didn’t renew my contract. I was simultaneously promoted at my paper job, going from customer service associate at their retail store to the corporate headquarters, where I eventually grew to become the company’s first Creative Director.

The President & CEO supported the development of my new position, and in that role, we collaborated to redesign the brand and develop new product lines. When he decided to step down and leave the company, that led to an acquisition, which resulted in the termination of my position. I quickly hit an unemployed low from riding a career high and found myself waiting tables at a local bar. I stayed in touch with my CEO mentor, and after a few months passed, he approached me with a proposition, “Are you interested in joining me and a tech professional to create a fashion app?” No-brainer, I became a founding member of Hanger.io.

For over two years, I represented the company at several tech conferences, including Web Summit held in Dublin and Lisbon. Several times, we presented the concept at Decoded Fashion in New York and Collision in Las Vegas. Unfortunately, the venture failed, and I found myself back waiting tables.

I searched for almost eight months to find something while supporting myself by driving for Uber, Lyft, and Postmates and still waitressing. I continued to network, visiting all the local galleries and creative hot spots. One day I was sitting in my car outside of Pastaria in Clayton waiting on a Postmates order, doing what any millennial would do, swiping through Tinder – JUST KIDDING – I was scrolling through Facebook. I saw a post by Barrett Barrera Projects. They were seeking a Marketing Director. Not exceptionally qualified for the position, I completed the Postmates order and ran home to apply.

As fate would have it, my networking paid off, and although the company didn’t hire me for the position I originally applied for, they were intrigued by my experience. I was offered a trial-to-hire contract opportunity. I spent six months supporting two major projects; the first was producing The Charlie Factory by Charlie le Mindu at The Standard Downtown LA. It was presented over Halloween weekend, and the event included guest appearances by Princess Vitarah, Kembra Pfahler, SSION, and Peaches. The second project was fabricating updates and packaging the exhibition, A Queen Within: Adorned Archetypes, for its touring debut at the New Orleans Museum of Art.

Almost five years later, I am Barrett Barrera Projects’ Project Manager, overseeing the stewardship and preservation of the largest private collection of Alexander McQueen’s work. In addition, I support the development of Barrett Barrera Projects’ touring exhibitions, leading the execution of fashion garment mounting and display and developing the standards we use for installing contemporary fashion pieces.

Let’s dig a little deeper into the story – has it been an easy path overall, and if not, what were the challenges you’ve had to overcome?
Not at all. Those two moments in my career where I relied on my job waiting tables were challenging for two reasons. I felt I was in those positions because of what could be considered failures to meet my potential. It was challenging because serving tables in a restaurant is hard work! I was fortunate that my neighborhood Cheers welcomed me into their family of service not once but a second time. They were an incredible group of industry professionals who took me under their wing, mentoring me even though they knew I was working there to make ends meet while trying to find a way out of there to move forward with a career in the arts.
Side note: Tip your wait staff 20% minimum no matter what. Be kind; there are a lot of variables that go into waiting tables.

Back to regularly scheduled programming: Those moments played an influential role in shaping my career and personal growth. I credit those two periods in my professional life and the people I met along the way to the work ethic I can now attribute to my achievements.

One other takeaway is that I overcame those difficult career moments because of the relationships I cultivated, two of which became vital mentors. They’re successful professionals that saw potential in me and took the time to encourage and support my growth. Both were able to offer me opportunities coupled with elements of trust and respect that helped me flourish and thrive, resulting in steady professional growth. A testament to the power of encouragement – a little bit can go a long way!

Alright, so let’s switch gears a bit and talk business. What should we know about your work?
To think that twelve years ago, I was a very distant admirer of Alexander McQueen’s work, and now Barrett Barrera Projects entrusts me with the daily stewardship of a significant collection that houses some of his rarest works, it’s wild. I had no formal training in costume or textile preservation when I joined the company. I am self-taught through real-time experience, books, YouTube tutorials, collaborative opportunities from several conservators, and my informative membership with The Costume Society of America.

A large portion of Barrett Barrera Projects’ fashion archive are works by Alexander McQueen. Still, we also steward pieces by designers that are relevant to McQueen’s story, such as Sarah Burton era McQueen, John Galliano, pieces by Tom Ford for Gucci, and more distantly adjacent, Vivienne Westwood, to name a few. Along with managing fashion objects such as dresses, coats, pants, blouses, skirts, shoes, bags, etc., I also care for a substantial amount of artifacts and ephemera from McQueen’s life and his studios, such as original sketches, patterns, unfinished garments, runway show invitations, and business documents.

Closely accompanying the care and preservation of contemporary fashion objects is the mounting and display of those works. I manage a large inventory of mannequins and dress forms used to display our objects when included in one of our touring exhibitions. It’s exciting to be trusted as the custodian of such important history closer to its infancy. I get to care for it, but I also get to handle the work so it can be seen. That’s one thing I love about working with Barrett Barrera Projects’ founder, Susan Barrett, to maintain this collection; the safety of each piece is extremely important but so is being able to see and experience the work. Lumens, temperature, humidity: there are a lot of variables to consider when assessing risk before displaying a piece. It’s not something to be taken lightly and comes with a lot of responsibility. At the same time, taking steps to ensure an object’s safety is only worth it if that piece can also be enjoyed. Barrett Barrera Projects strikes that balance in a way that values accessibility just as much as we value safety and condition.

Most items I care for in our collection are from the mid-1990s and later. There’s a lot of familiarity with the works since we aren’t as far removed from them. At this point, most admirers have had firsthand experience witnessing the presentation of pieces. Contemporaries and collaborators are still alive and able to share recollections that can be highly informative when presenting a piece, both in how it’s displayed and the narrative expressed about the work. To be a part of the immediate capture of history is quite a thrill.

On a personal note, being an identical twin encouraged me to develop an autonomous sense of individuality which attracted me to some distinct signifiers of self, some being my love for The Rolling Stones, a playful and sometimes questionable sense of style that often presents itself as a pattern on pattern on pattern, my long golden hair, brightly manicured nails, an affinity for wild shoes, and a general appeal to all that sparkles and shines.

That appreciation for individual authenticity to distinguish me from my twinship allows for a paralleled relatability to Susan Barrett and even McQueen himself. Two people with distinct visions and an unapologetic approach set them apart from the competition. I admire their unique sensibilities, and you can see how that’s reflected in my approach to collections management; honor and care for the authentic because there will only ever be one.

Any big plans?
Facilitating art and fashion experiences through the mounting of immersive exhibitions has become a passion of mine. Professionally things are growing at Barrett Barrera Projects, and I hope to continue influencing the management of our fashion archive and the development of our touring exhibitions. This July, we’re off to the Fresno Art Museum in Fresno, California, to install A Queen Within: Adorned Archetypes for the fourth time. Fashion displayed in a museum context needs to be seen in person, so it feels really good to be getting back on the road to bring this cool exhibition to the people of Fresno!

Personally, my long love affair with the water has me moving to a house on the Mississippi River! It’s a home elevated on I-beams, so come flood season, you may find me Zooming into meetings, Kevin Costner in Waterworld style! We’ll see what life on the mighty Mississippi has in store. I love the juxtaposition of fashion and nature! To bring it back to McQueen one last time (can you tell I’m a fan yet? ha!), a large portion of his work was influenced by nature. He often sought solace away from the city at an estate owned by his late friend, Isabella Blow, so that he could connect with life beyond his obligations. He also loved scuba diving and experiencing aquatic life. I can’t say I would have recommended he scuba in the river, though!

In the twelve years since my graduation, I have found myself living my wildest dream, working for a company that champions the outliers, the marginalized, supports, and values the misunderstood. With a rebellious yet kind spirit, it’s an honor to support the mission of Barrett Barrera Projects, where Art is a Verb. Looking back on how I got here, I’m so thankful for where I landed and the experience with the process. It’s a gift to be able to work for a company that understands the importance of embracing and celebrating all things authentic, including me. 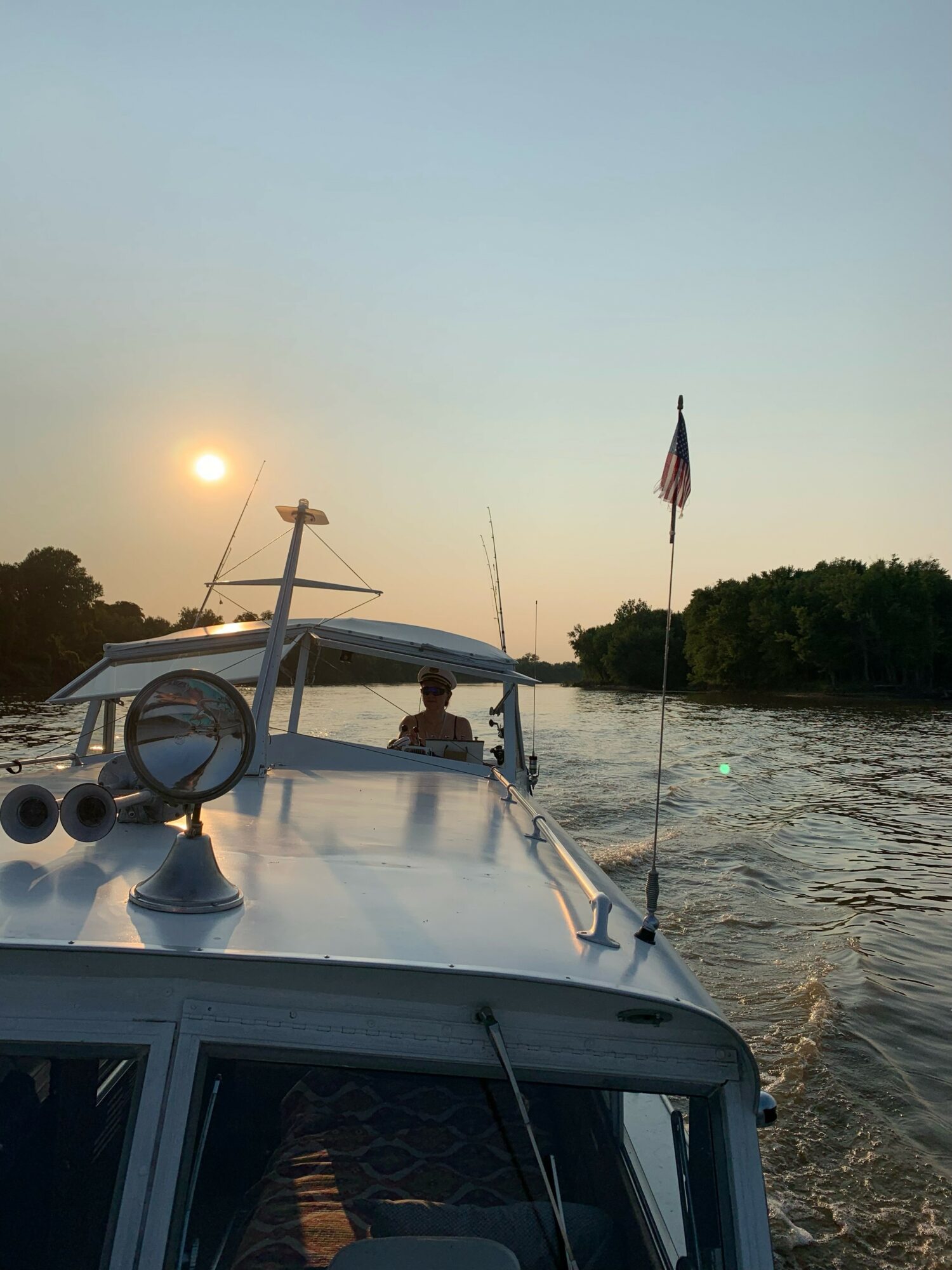 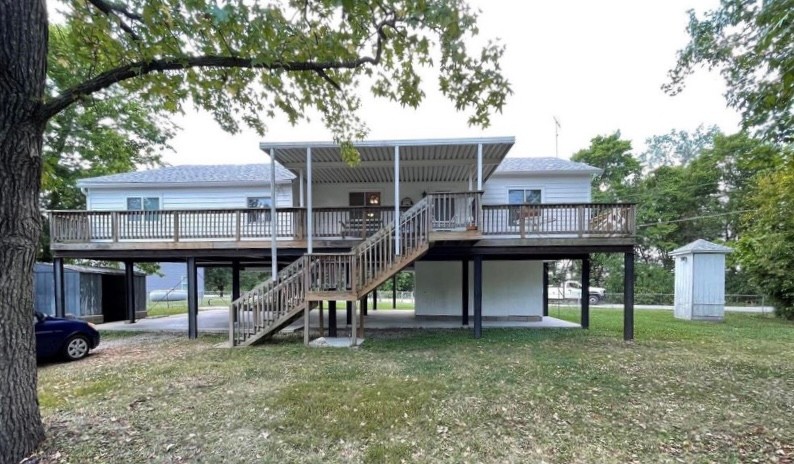 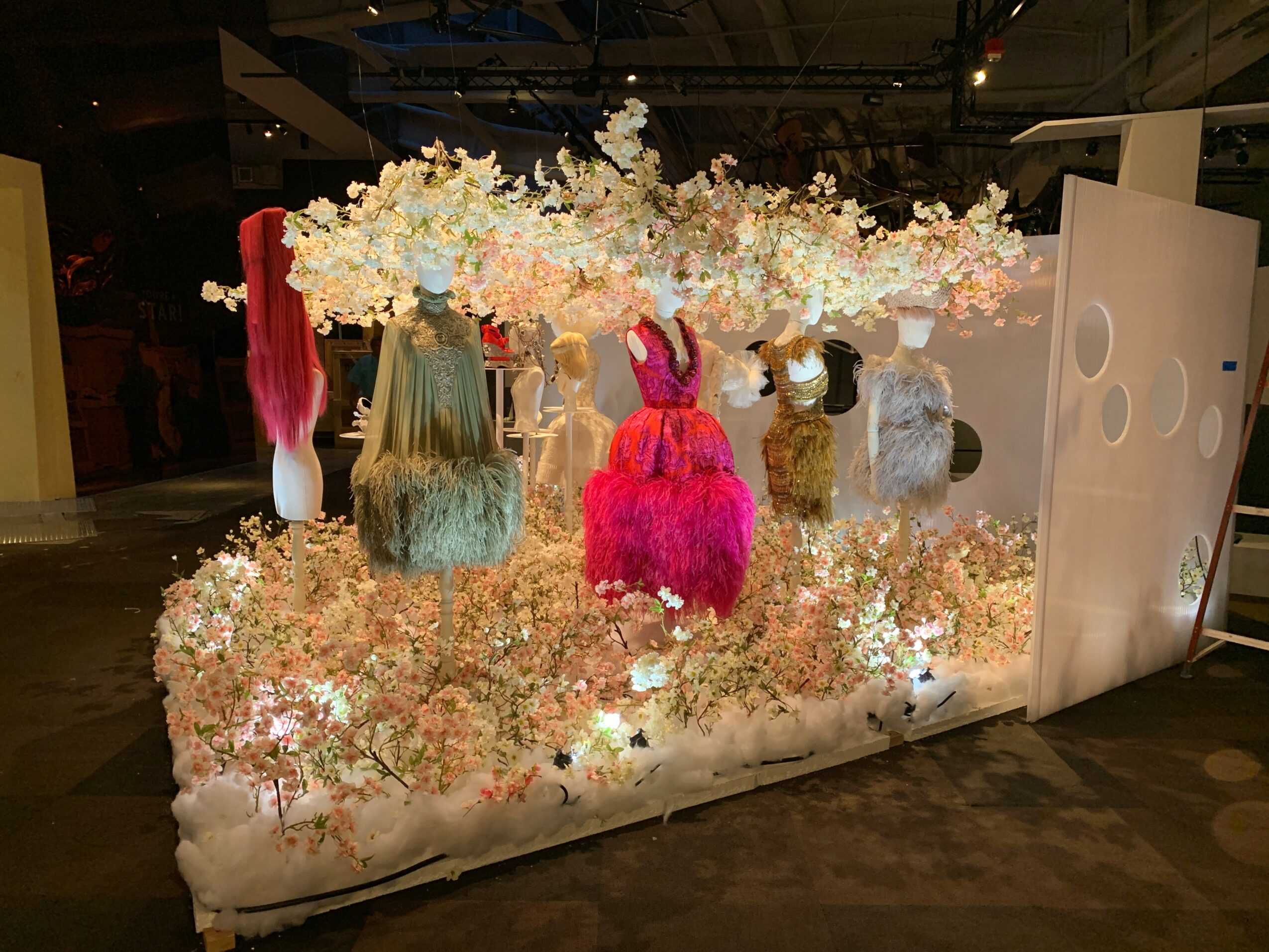 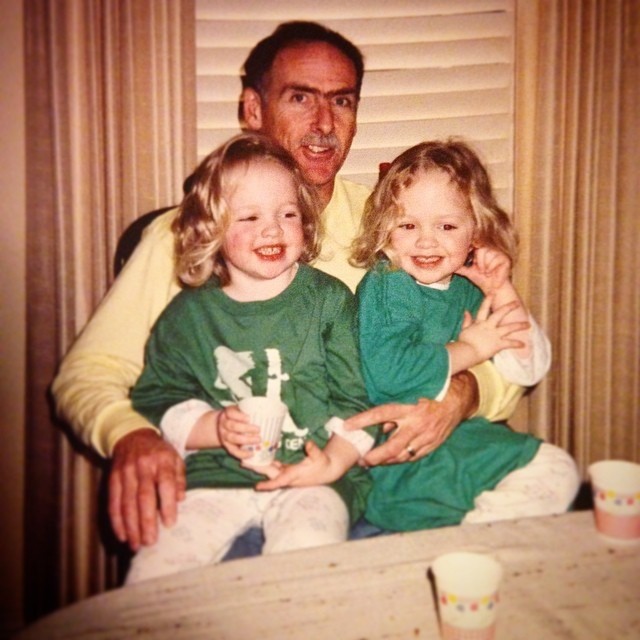 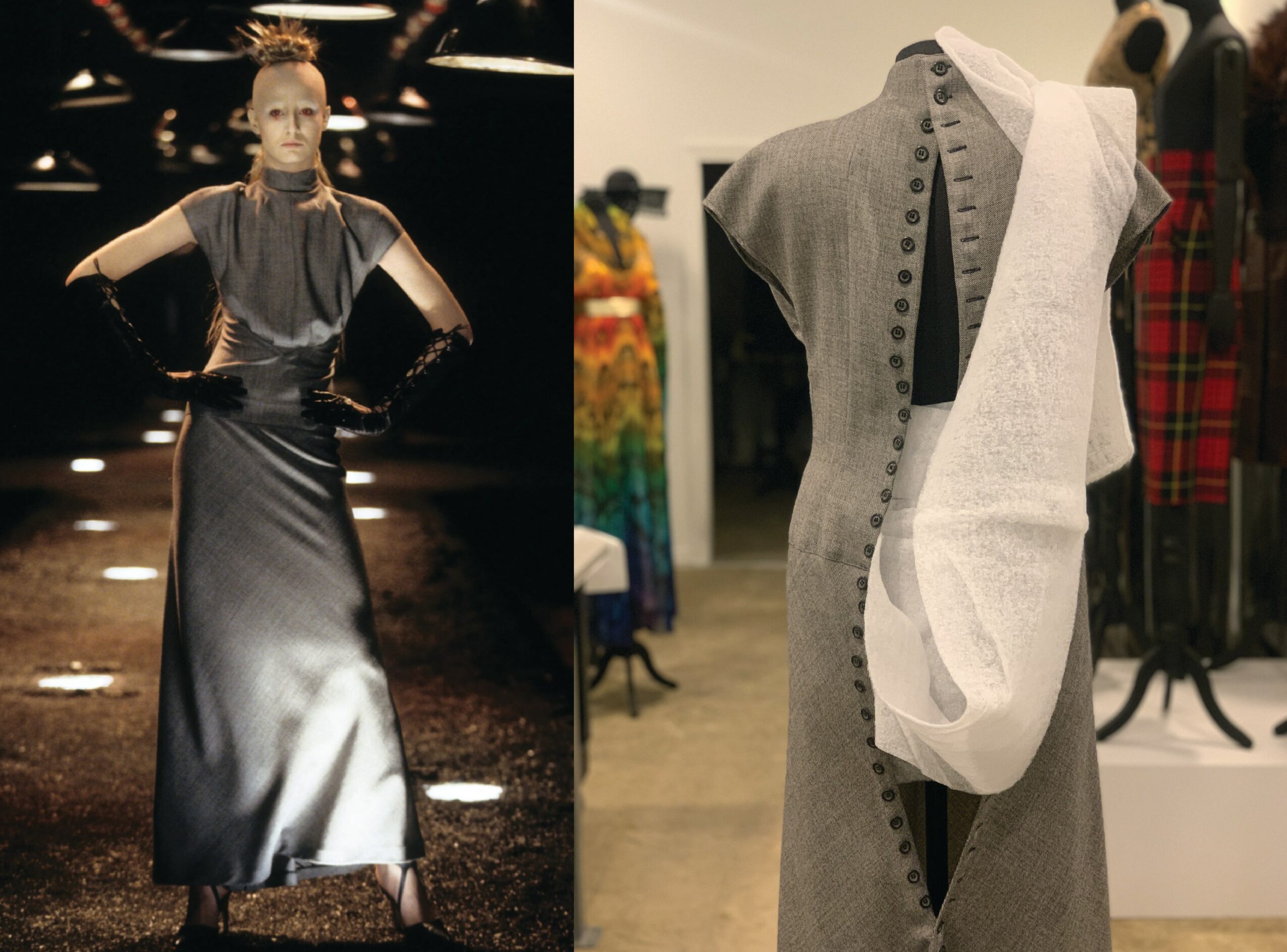 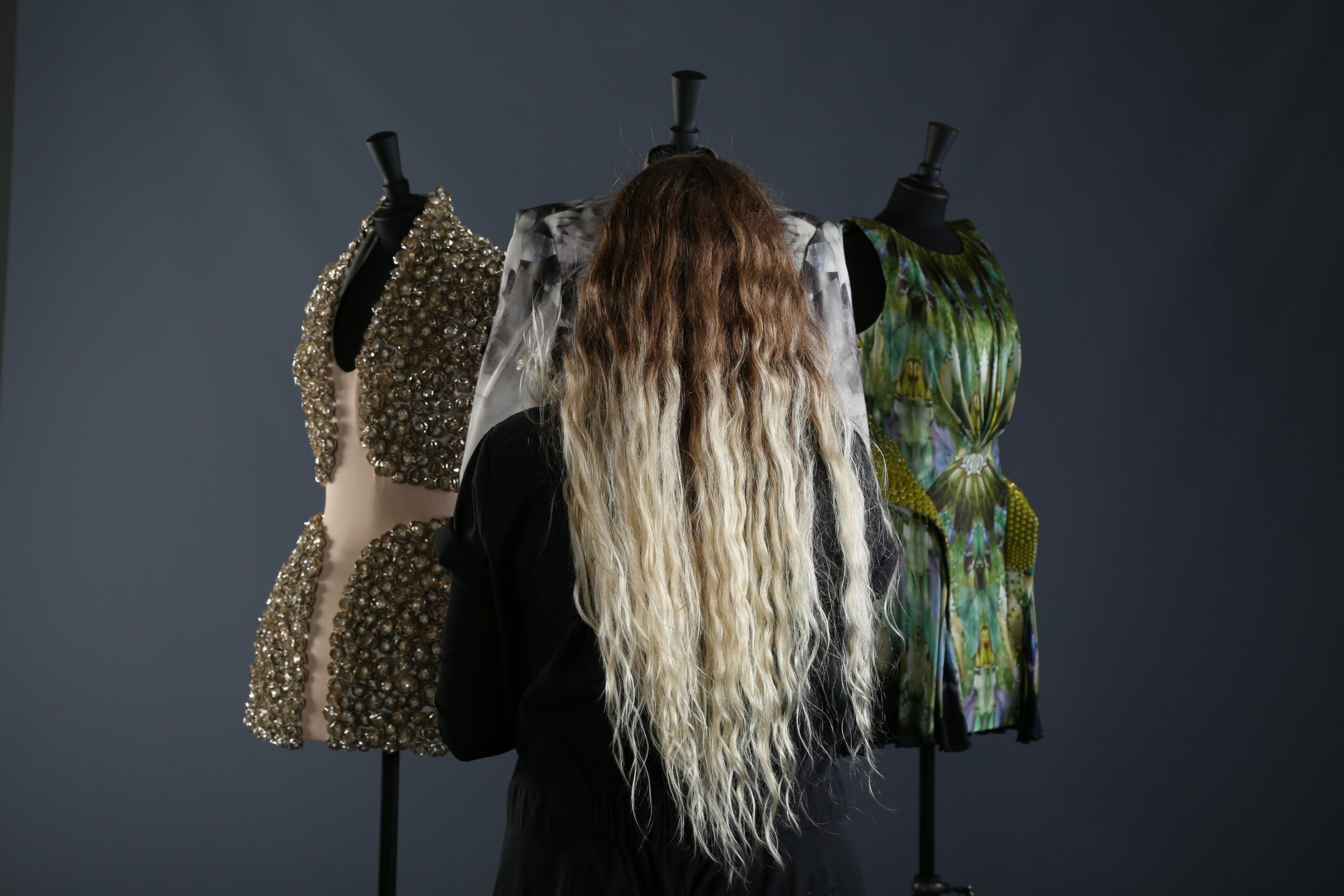 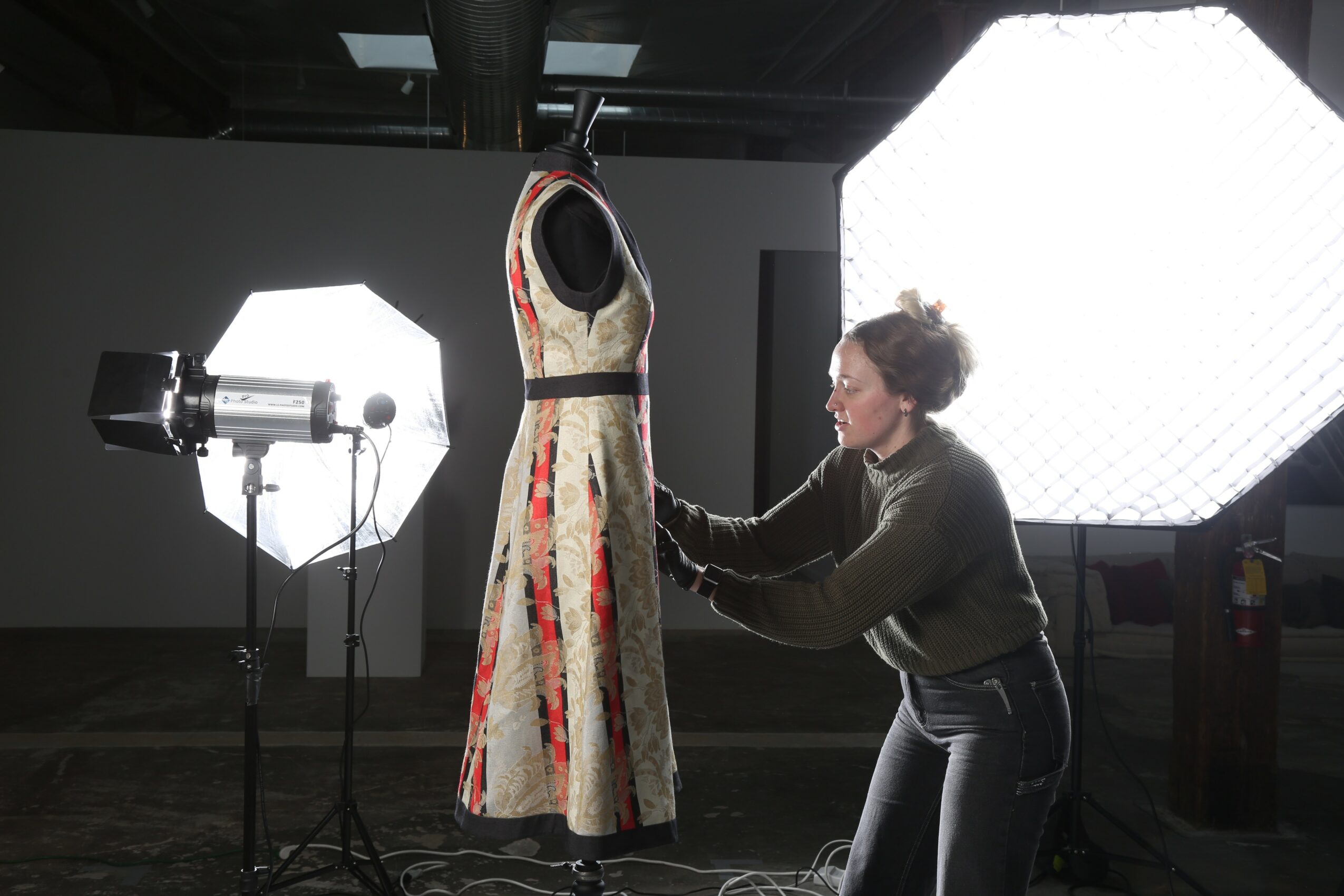 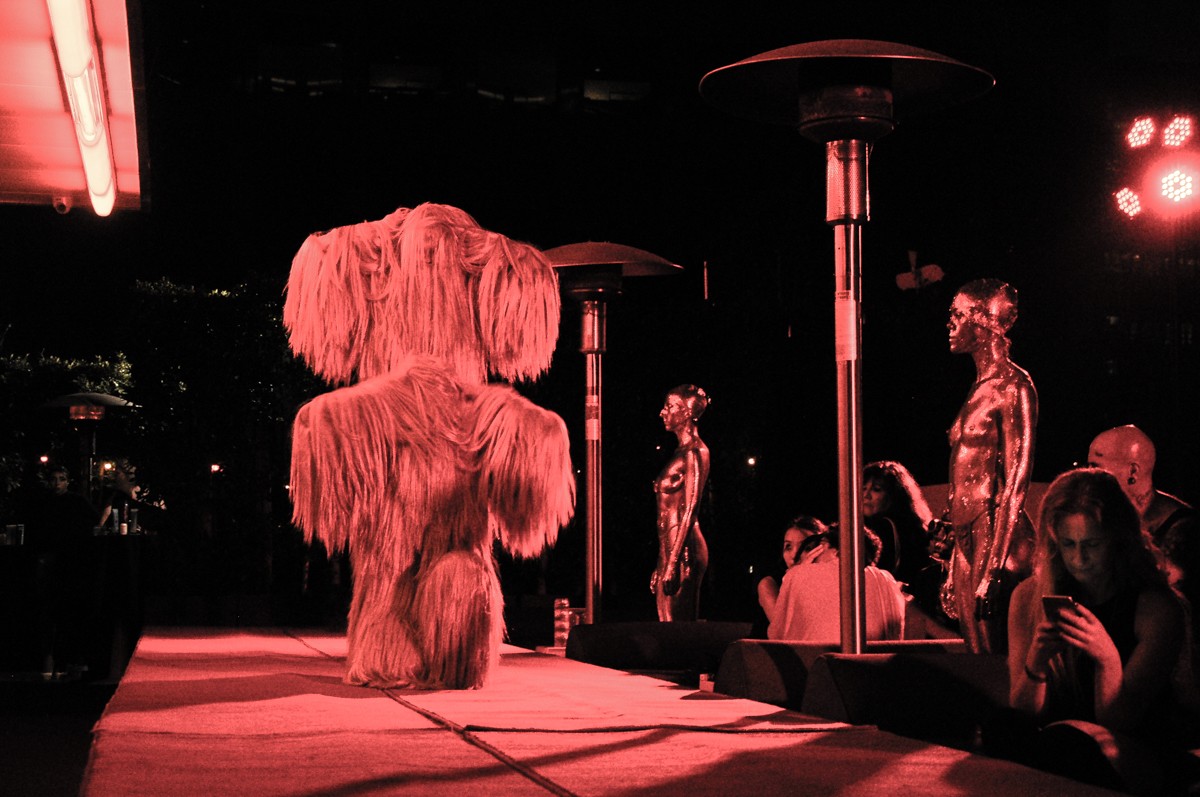