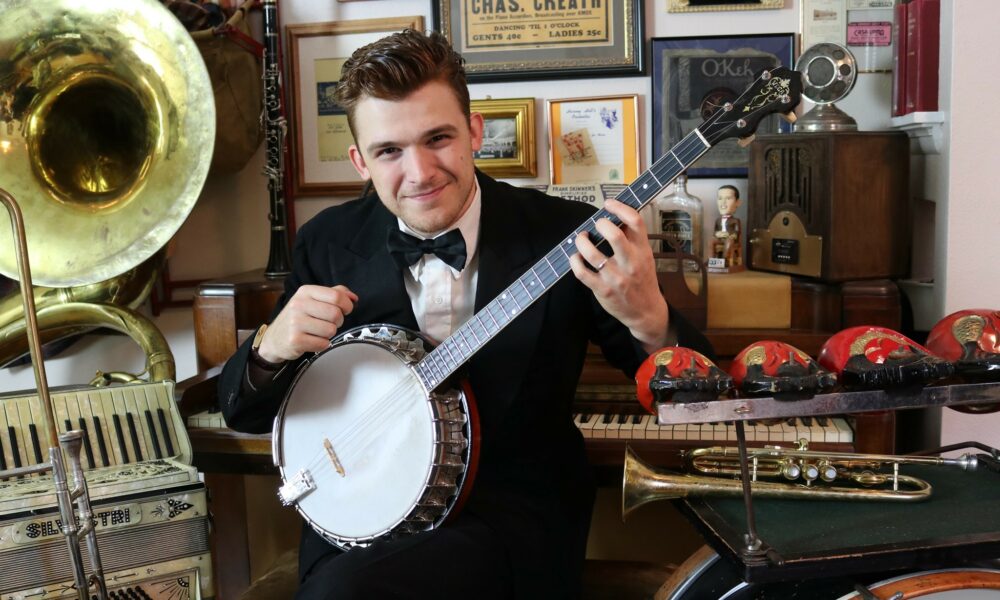 Today we’d like to introduce you to T.J. Muller.

Hi T.J., we’re thrilled to have a chance to learn your story today. So, before we get into specifics, maybe you can briefly walk us through how you got to where you are today?
Old jazz music always appealed to me even as a small child. We had some cassettes of old British trad jazz bands around the house, and my dad was a good musician who encouraged all of us kids to learn instruments.

I had initially wanted to play trombone but dad had found an old trumpet for two quid which I was handed instead. he even assembled a family jazz band that would play at little local or church events. My hero was Louis Armstrong, I got my first Louis Armstrong record when I was about 9 and I learned to sing all the vocal numbers.

When I made it to middle school, my buddies pooled their lunch money to buy me a ukulele and I really took a shine to it. I was already a fan of George Formby, a British Vaudeville star and ukulelist from the 1940s, after learning one of his songs and buying a cd of his music (I was a really odd kid if that’s not clear yet). I took a shine to the instrument and would write my own satirical songs to try and amuse my friends.

As a teenager, I learned a little bit about a five-string banjo and also began playing some trombone. A local ‘Skiffle band’ (British jug band music) made up of some older local musicians took me under their wing and offered me some of my first paid gigs in pubs and bars playing trumpet, harmonica, and washboard. In this group, I learned many Americana and blues standards.

I always loved history and tried and failed twice to read history at university, each time music sort of pulled me away. Plus I’m just a poor and distracted student in general. The second time I left to tour with a great band from Newcastle called Rob Heron and the Tea Pad Orchestra. This got noticed by then St. Louis-based Americana songwriter Pokey Lafarge who offered me a 3-year contract to tour with his great group. I was thrilled, nervous too, and a lot of self-doubts, but very excited.

Touring with Pokey was an amazing experience, I always felt like a bit of a fraud next to some of those great musicians, but I saw a lot of the world. I got to meet and work with guys like Jack White from the White Stripes and play all sorts of neat TV and film things.

We played The David Letterman Show, The Grand Ole Opry (I got to play banjo on that one!), A Prairie Home Companion, all sorts! Pokey could be a hard taskmaster sometimes, but I learned a lot about American music from him, and he was (is) an excellent showman and extraordinarily driven. I’ll always be thankful to him for seeing enough potential in me to jumpstart my music career and bringing me to the US.

Once my contract with Pokey ended I decided to stay put in St. Louis for a while, I had gotten married and wanted to begin to root myself more in the music and community here. I had gotten to know some of the remaining members of the St. Louis Ragtimers and knew that the next step in my jazz education would mean seeking out mentorship.

I got to know local cornetist Bill Mason (now 93 years old!) who has been performing in St. Louis since the mid-1940s, he has been a huge influence on my approach to jazz. Also, Marty Eggers, son-in-law of the late pianist Trebor Tichenor, has taught me more about the appreciation and performance of traditional jazz and ragtime styles than anyone else.

I formed a small jazz combo The Gaslight Squares which began working regularly around town, paying homage to the musicians of the St. Louis Gaslight Square district, and trying to establish ourselves as the next link in the chain of St. Louis traditional jazz and ragtime. Shortly after I formed the Arcadia Dance Orchestra, an 11-piece band that performs monthly and specializes in the historic jazz of 1920s St. Louis, it’s a hoot!

During the pandemic, since there was little music performance work to be had I worked delivering historic tours of the Scott Joplin House on Delmar, helping to educate about the life of ragtime’s most influential composer as well as the amazingly rich history of ragtime which St. Louis holds. I also began weekly ragtime, jazz, and blues radio show on 88.1 KDHX called ‘The Riverboat Shuffle’.

I have lived here for almost 10 years now, and I can’t say I don’t miss the UK.

But I feel indebted to St. Louis for sustaining me as a working musician and have fallen in love with the incredible musical history of this city. There is so much to learn and so much to share and enjoy about St. Louis music history and it is a joy to share my passion for this history and music both in town and wherever my music travels take me.

Alright, so let’s dig a little deeper into the story – has it been an easy path overall, and if not, what were the challenges you’ve had to overcome?
I’ve been very lucky and been given a lot of help and some great opportunities along the way. But I’ve always had tremendous self-doubt, I never had any formal training and have always sort of had to ‘learn on the job’.

I probably consider packing it in about every 2 months! sometimes it just seems like there isn’t enough work to be had or money to be made. Sometimes I just feel so far away from achieving the quality of music that I want to that it all seems futile.

Trumpet can be quite a hard instrument to keep up on too, and I often feel like I can’t put in the time to make good on the instrument. But something or other always seems to pull me back on track, whether it’s an inspiring record, or conversation even.

Appreciate you sharing that. What else should we know about what you do?
I specialize in the performance of 1920s jazz, and I am most proud of the work I do to promote St. Louis’ own jazz history, largely through the performances of my group The Arcadia Dance Orchestra.

I also love doing my weekly radio show and getting this amazing historic music on the St. Louis airwaves once a week. Some of the records I spin were performed by bands who performed and even recorded in a 5 block radius of the station!

We’d be interested to hear your thoughts on luck and what role, if any, you feel it’s played for you?
A lot! When I first started gigging and the jobs started getting better and better I thought I must have been born under a lucky star. I always felt my abilities were unable to catch up with the opportunities I was being afforded.

But if I had to really analyze it, it wasn’t luck per se, I was just young with very few responsibilities and tried to say yes to any opportunity even slightly related to the music I wanted to play.

Trying your best to be nice, genuine, and easy to work with can help a great deal in the music world, there are a lot of egos and divas out there! 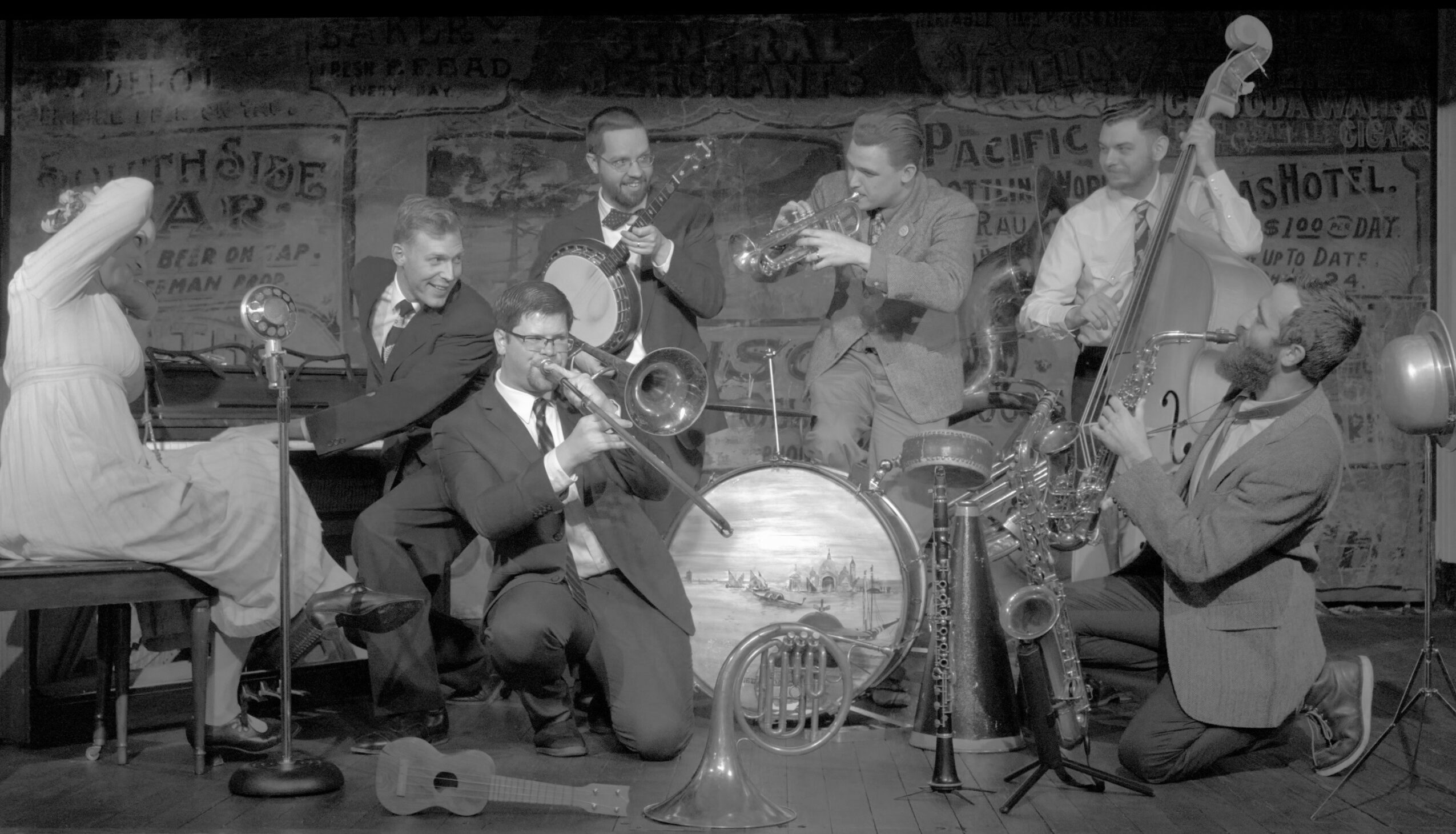 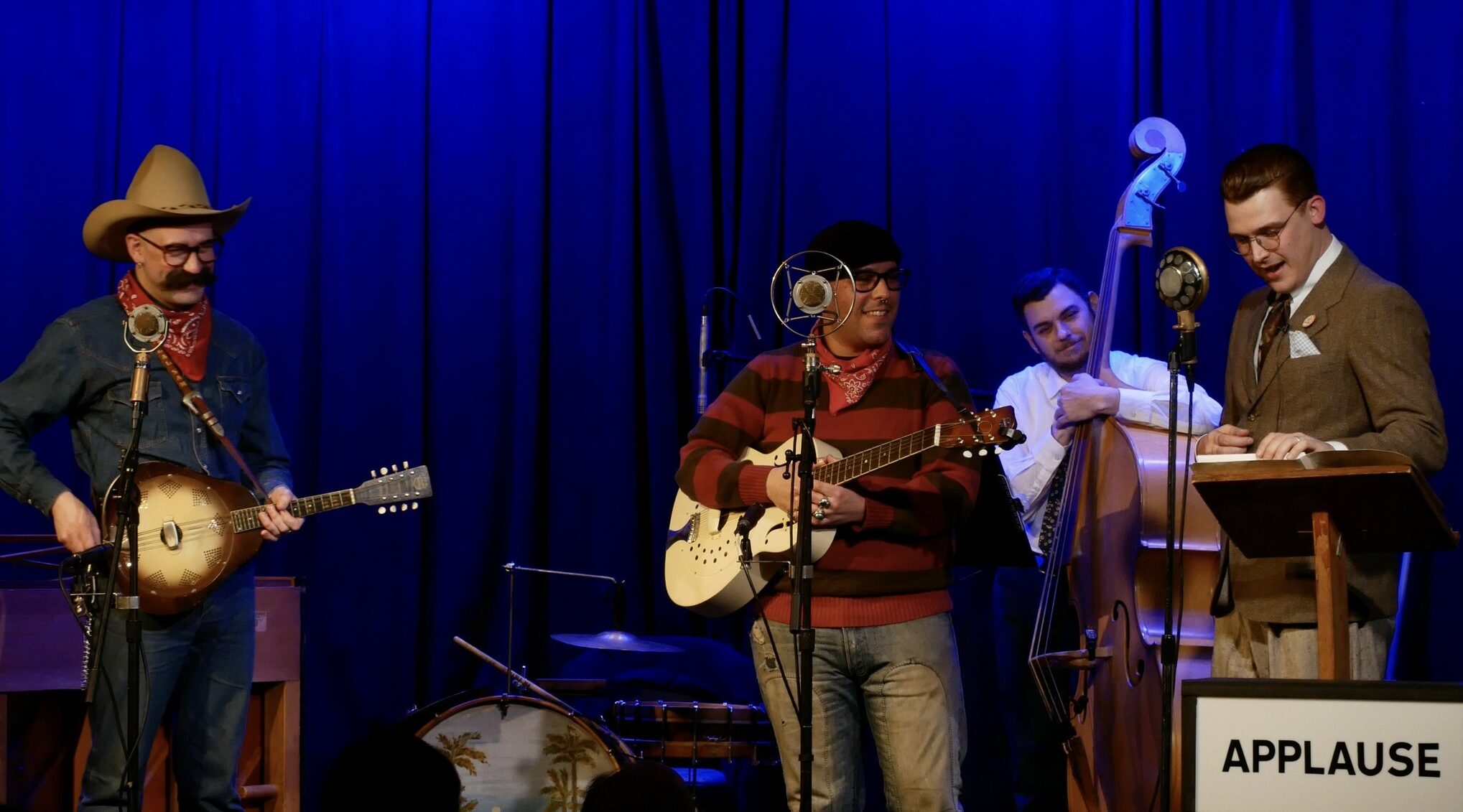 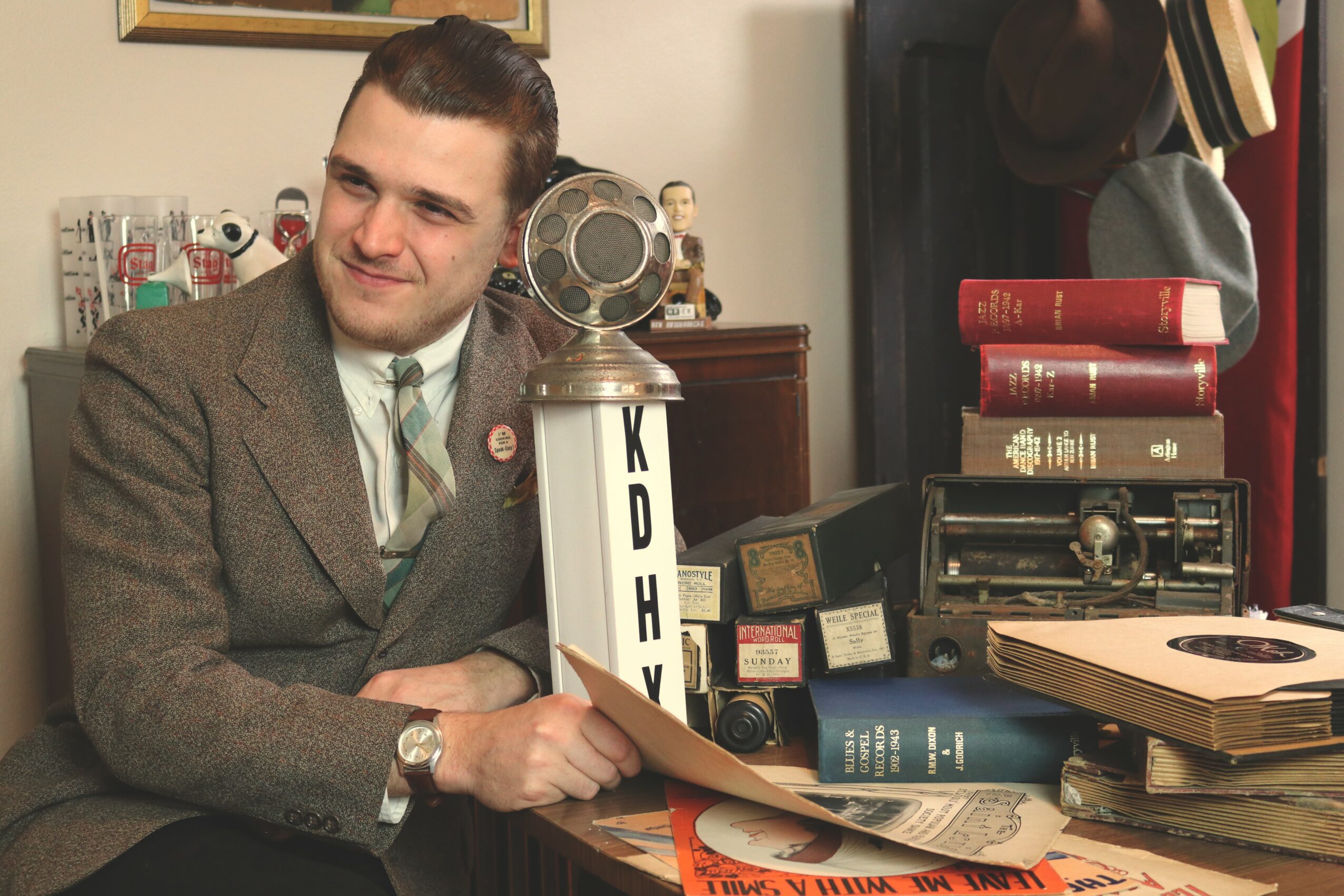 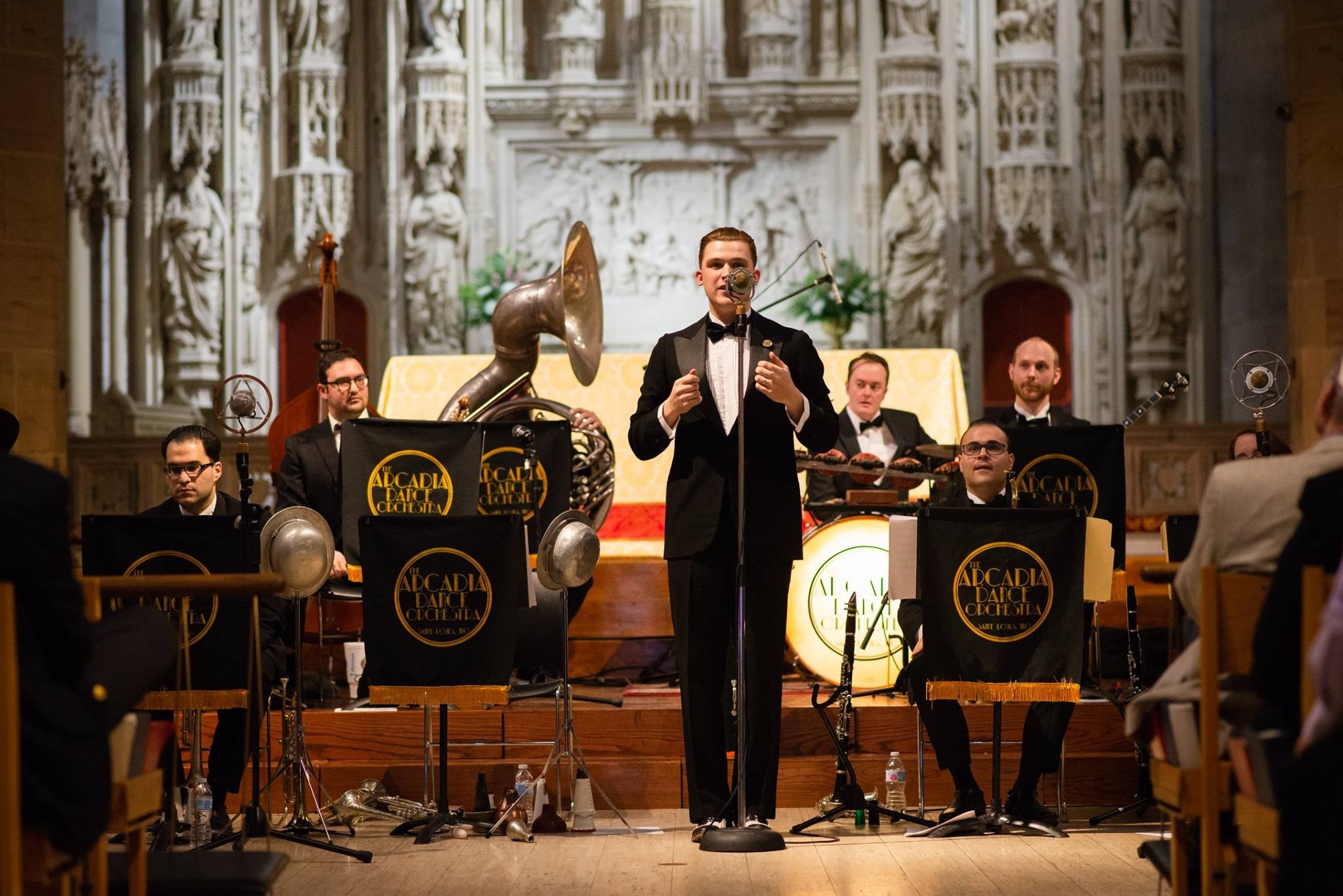