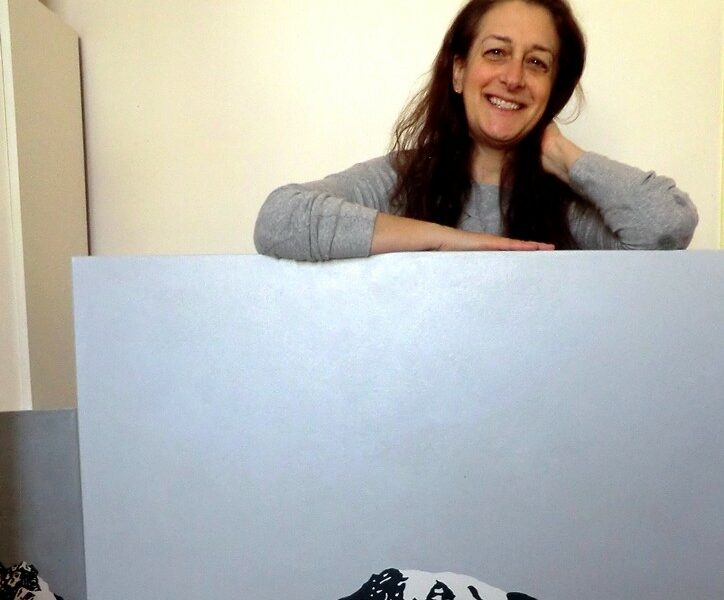 Today we’d like to introduce you to Naomi Silver.

Hi Naomi, it’s an honor to have you on the platform. Thanks for taking the time to share your story with us – to start maybe you can share some of your backstory with our readers?
My dad was a doctor but he was also a very talented artist and photographer, so perhaps some of my talent comes from him. Also, my parents made sure we were exposed to a lot of arts and culture as kids. I was probably into drawing a bit more than most kids, but there were lots of other things I was more interested in. One thing I remember doing when I was little was making little abstracts for my Barbie doll (I still have a few of them!). But when I was in middle school, the art teacher drew on one of my drawings one day and I was so upset that I stopped making art until my late 20s.

When I was in high school, I wanted to be an opera singer but stage fright put a quick end to that. And then I wanted to be an international businesswoman (of some sort or another). Clearly, I didn’t become either of those things but I did do a bunch of other things before becoming an artist.

I studied History and Russian Area Studies at the University of Wisconsin-Madison because my brother taught me the phrase “It’s snowing” in Russian and I thought Russian sounded cool, After two really awful secretarial jobs for international companies, I ended up teaching English as a Second Language for 14 years because I liked being around foreigners & had no idea what else to do. When it was time to leave teaching, I was offered a volunteer position doing outreach to ethnic/immigrant communities in St. Louis for a US congressional campaign. And then I was hired to do the same on a US senatorial campaign. Due to the work I did on the campaign, I ended up creating an arts and culture website for St. Louis (CultureSurfer.com-no longer exists). And then one day, I dared myself to start painting, just to see what would happen. if I could do better than some of what I had seen while doing art interviews for the arts and culture website. I put a few paintings on Facebook, & they started selling. And that was that. I was hooked.

I’m sure you wouldn’t say it’s been obstacle free, but so far would you say the journey has been a fairly smooth road?
I hate to sound like a cliche, but selling my work is my biggest challenge. I’ve sold over 120 paintings since I began painting in 2009, but the sales tend to come in waves so it’s difficult to stay motivated to create work during the lulls. But if I stay out of the studio too long, I start feeling out of balance or like I’ve lost part of myself. I know there are other artists who create every day, but that’s just not me. The focus, desire to create, and energy have to be there.

Appreciate you sharing that. What else should we know about what you do?
I’m known for two distinct styles of paintings-very colorful abstract finger paintings and graphic/minimalist mountain paintings. I’m not sure why I started painting with my hand soon after I started painting, but I love the connection between my hand, the paint, and the canvas. Creating the finger paintings is a very intuitive process; I try to take myself out of the process and just let it happen. It’s a quick process but if the stars aren’t aligned, so to speak, I end up with what looks like mud on a canvas.

I started painting mountains after visiting the French Alps in the summer of 2019, ten years after I began painting. I couldn’t stop staring at the contrast between the rock versus the snow & glaciers, so I knew I had to start painting mountains when I returned home. I was having problems with one of my first mountain paintings but one day I noticed every time I left the studio, the painting looked better from far away. So I switched from trying to paint a realistic mountain to painting a graphic version. It may sound or even look easy, but creating a painting in 3 colors that has depth is tricky. It takes a lot of brain work in addition to very tedious, exacting work with a very small brush. But I enjoy a sense of control that comes with working on these paintings. I never thought I’d work on one painting off and on for over a year.

The fact that I finger paint sets me aside from typical artists. That, and sitting on the floor to paint. I’ve just never adapted to using an easel.

I think it’s cool that I’m self taught. Maybe that’s a more difficult path, but it just feels right. I don’t think I would have survived art school, anyway.

How do you define success?
I’ve sold more than 120 paintings in 13 years, but I don’t consider myself a financially successful artist (still trying to get there!). Is it all about selling? No, but that’s definitely a part of it in my case. As someone once told me, it’s a validation of the work.

What most makes me feel great is knowing that my paintings make people feel calmer & happier. I’ve even heard from people who have PTSD that my work has helped them. Even if a photo I post makes someone breathe a little better for a moment or two, that’s very cool.

I’ve also been able to use my paintings to raise funds for an amazing parrot rescue organization, which is a cause very close to my heart. 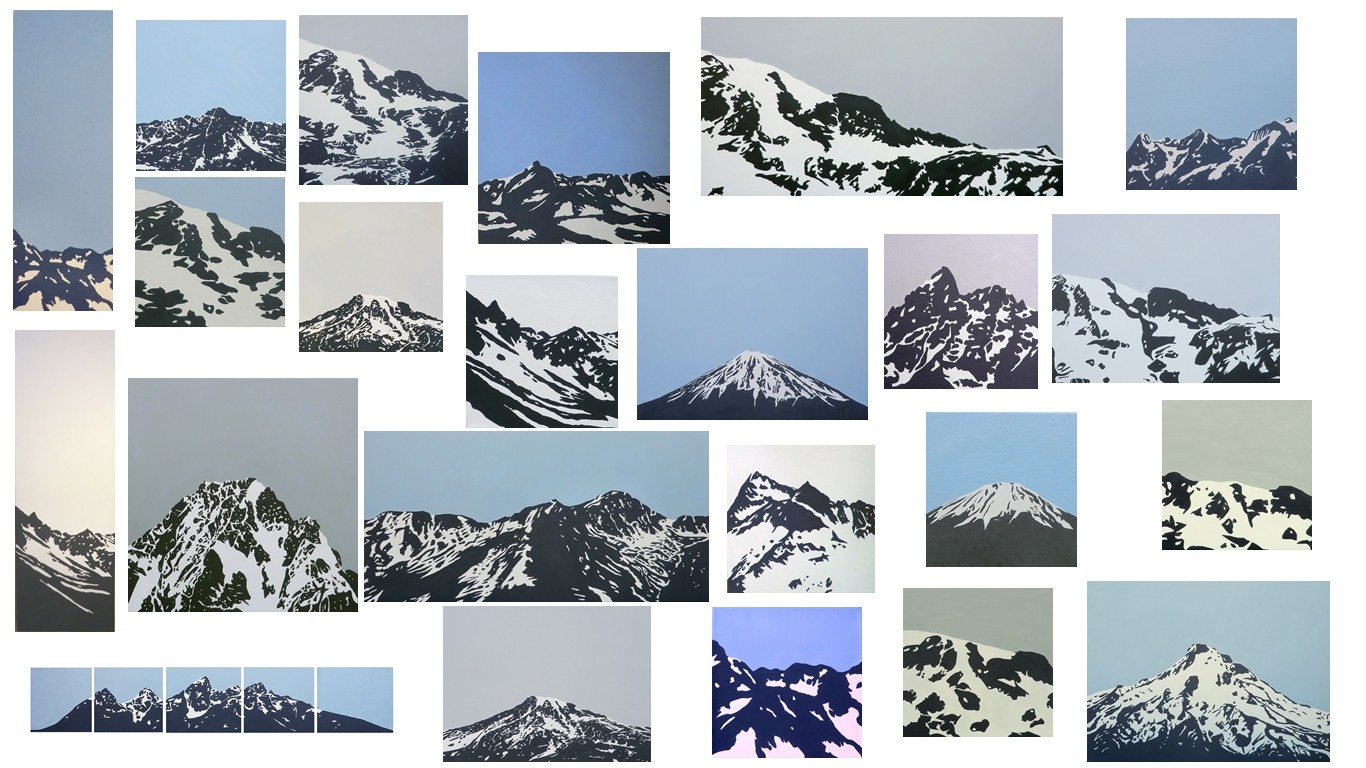 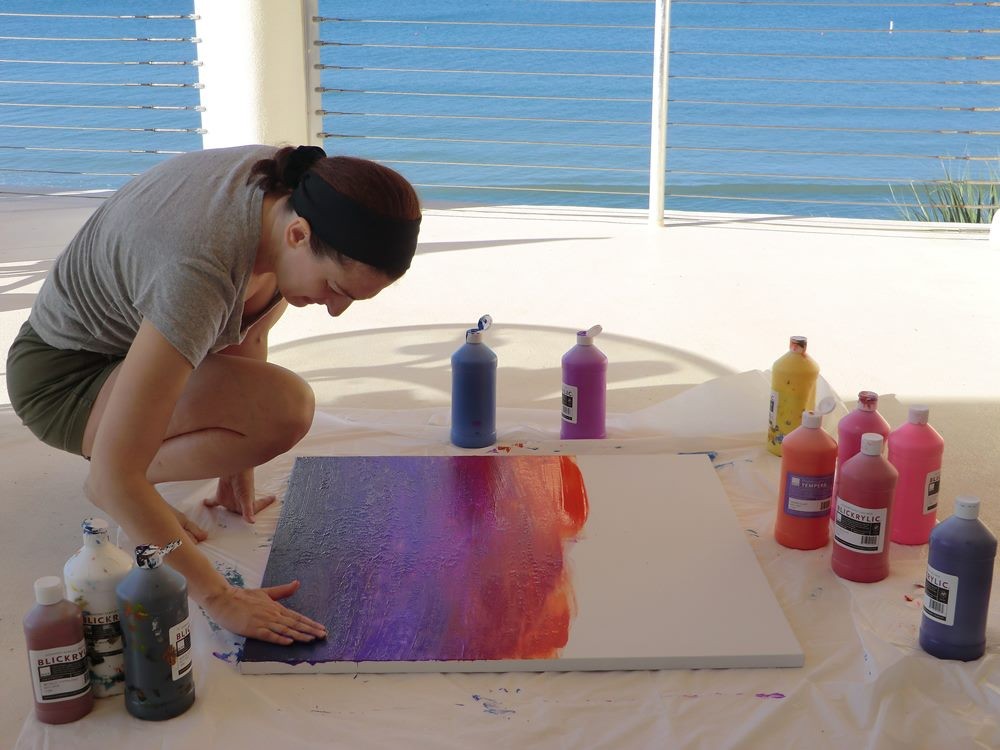 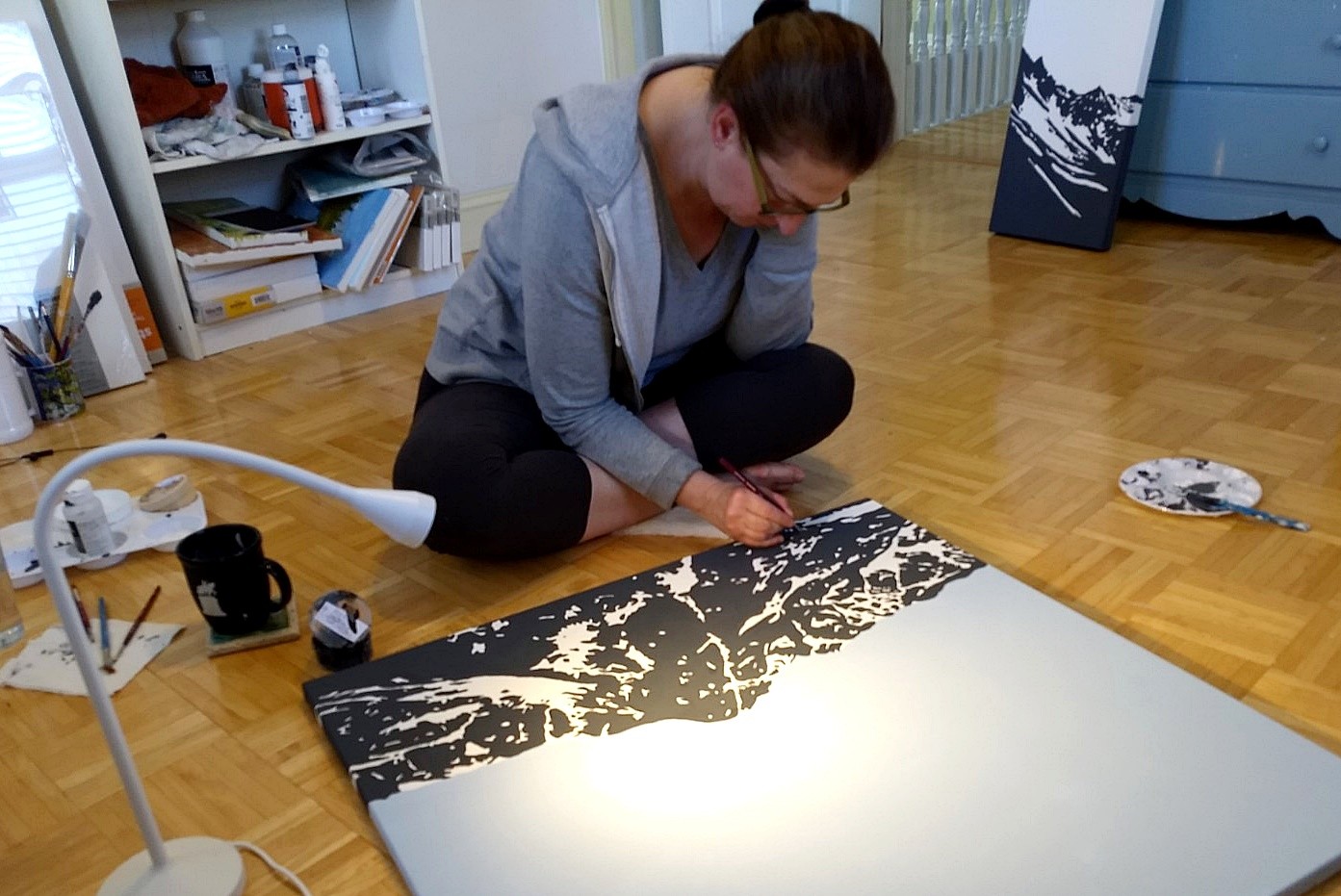 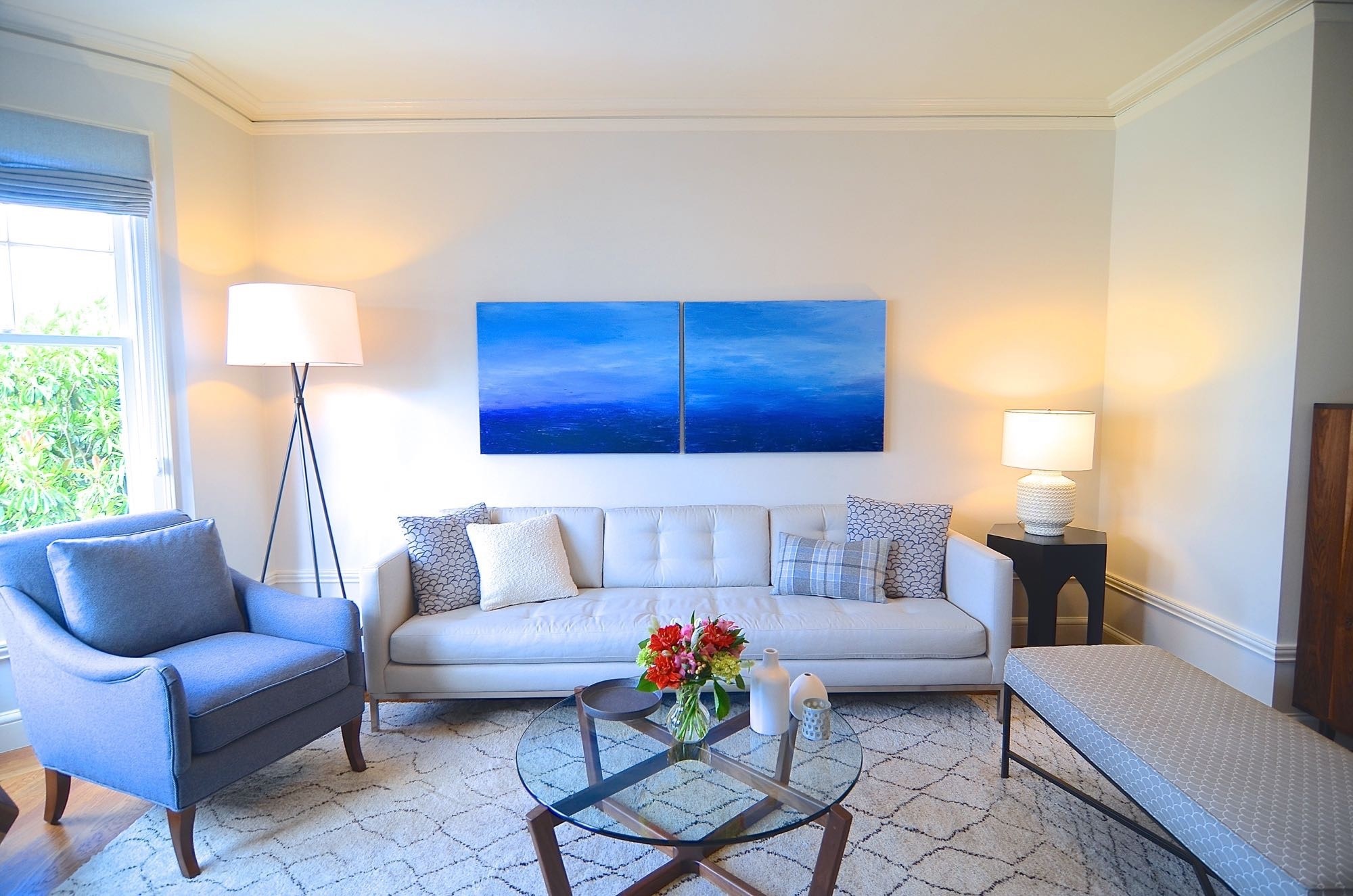 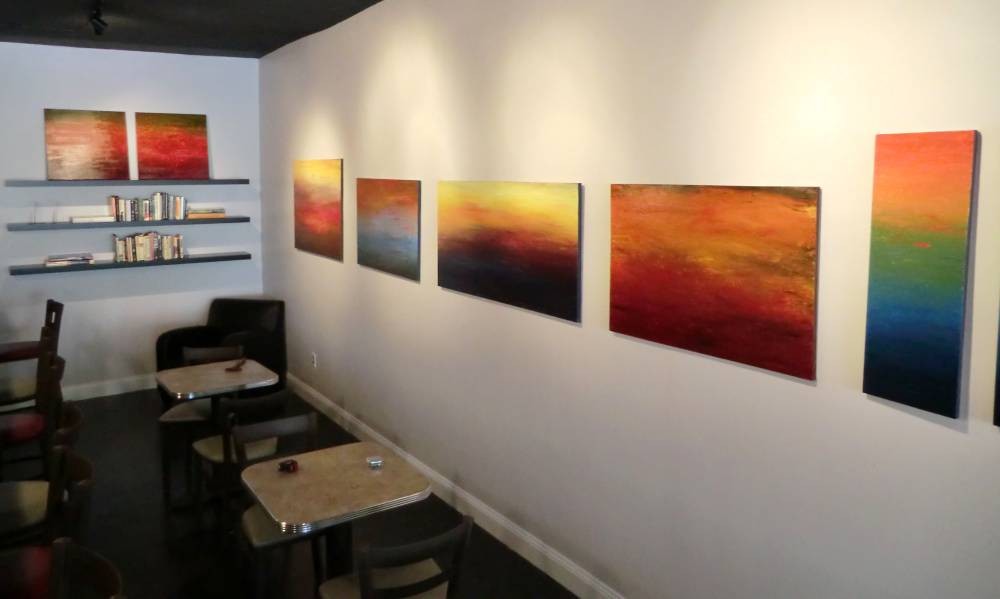